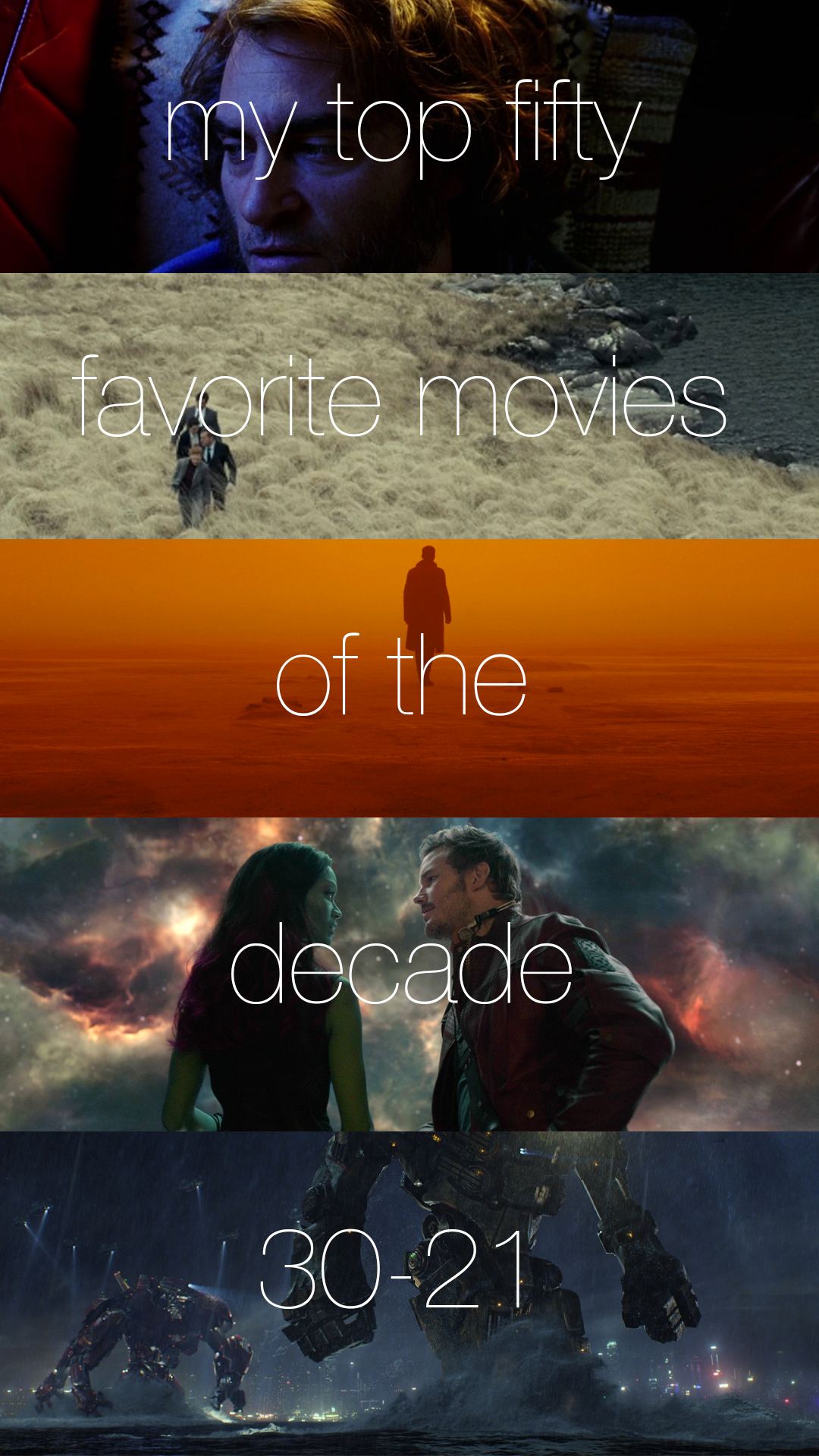 Welcome to the third day of our countdown of the 50 best films of the 2010s. Once again, all of these films are unique to this list and have not been on any of our previous lists. This list ranges from Box Office Smash hits, to Indie Best Picture winners, and pretty much everything in between. Here is our list from 30-21 of the best films of the 2010s.

Guillermo del Toro’s THE SHAPE OF WATER is certainly the weirdest movie to ever win the Oscar for Best Picture. But below the weirdness is a tender, fairytale heart. A tale of beauty and the beast, set in a cold war era state of paranoia. THE SHAPE OF WATER is a gorgeously crafted piece of fantasy filmmaking, and a great romance if you can get over the whole “sleeping-with-the-fishes” thing.

KUBO AND THE TWO STRINGS went criminally under the radar in theaters. This film, done in stop motion, from the same company that produced CORALINE, is an epic fantasy adventure, like THE LORD OF THE RINGS with Japanese influences instead of European. It’s action-packed, looks beautiful, and has an emotional wallop that is great for all audiences.

Of all of the horror films that we have seen over the past few years, none have gotten under our skin quite so much as THE KILLING OF A SACRED DEER. This is a horror film that never sets out to scare you, it never uses jump scares, or violence, or gore. Instead, there’s this deep emotional dread as a father must make a choice about which of his family members will die to save the others. Not only is it horrifying, it’s also just strange and absurd to the point that this feels like SOPHIE’S CHOICE as made by aliens.

From the minds behind SPIRITED AWAY, and tons of other beautiful animated movies. THE WIND RISES is a slow-moving, mature, and achingly sad film from a master at the end of their career. This movie doesn’t have the fantasy elements of SPIRITED AWAY or MY NEIGHBOR TOTORO, but it has the soul and emotional core that made those movies so special.

Martin Scorsese wanted to make a movie that his young daughter would be able to watch at the time. The genius behind THE WOLF OF WALL STREET’s 2011 venture into family movies manages to make 1920s Paris into a fantasy playground, all set with a backdrop of a tribute to silent movies.

Feels ironic to have placed a Marvel movie one spot above a Scorsese movie, but I promise, it was not planned that way. AVENGERS: ENDGAME is just a monumental moment in movies this past decade. Not only is it a great movie on its own, but it’s a monolithic achievement for a series that took eleven years to be built up into the cultural phenomenon that it has become. ENDGAME is a touching conclusion to the first era of this franchise and remains just as fun on revisits as it first was seeing it in theaters this past year.

This 2015 film about a war with the Mexican Cartel is tense, brutal, and disturbing enough that you will feel you need a shower afterwards. But really, this is peak action cinema, where every moment counts, and silences can speak louder than gun shots. But gun shots speak loudly too. SICARIO is the definitive movie about the war on drugs.

An action movie that starts at 100, and stays at 100 the whole way through. With barely any set up, MAD MAX: FURY ROAD jumps us right into the action, and it doesn’t let go for two hours of high-octane stunts and chase scenes. But what makes MAD MAX stand apart from any old action blockbuster is the world-building that becomes clear without anyone having to talk about it. Simply by driving across an apocalyptic Australia, MAD MAX: FURY ROAD creates an entire universe and leaves the audience longing to keep exploring.

One of this year’s Oscar contenders, MARRIAGE STORY is a strong contender for the worst date movie of all time. Led by two goliaths of acting, both working at the peak of their game, and has a script that is so deeply personal that it becomes relatable to everyone. Don’t let the Twitter memes fool you, this film boasts some of the best acting of the past ten years. Go in ready to weep.

Joaquin Phoenix has finally achieved the status of A-List megastar this year with the success of JOKER. But his best acting can be found in this story about a World War 2 veteran who joins a Scientology-esque cult. THE MASTER remains one of the most gripping dramas of the past ten years.

Thanks for reading! Join us tomorrow for films from 20-11.