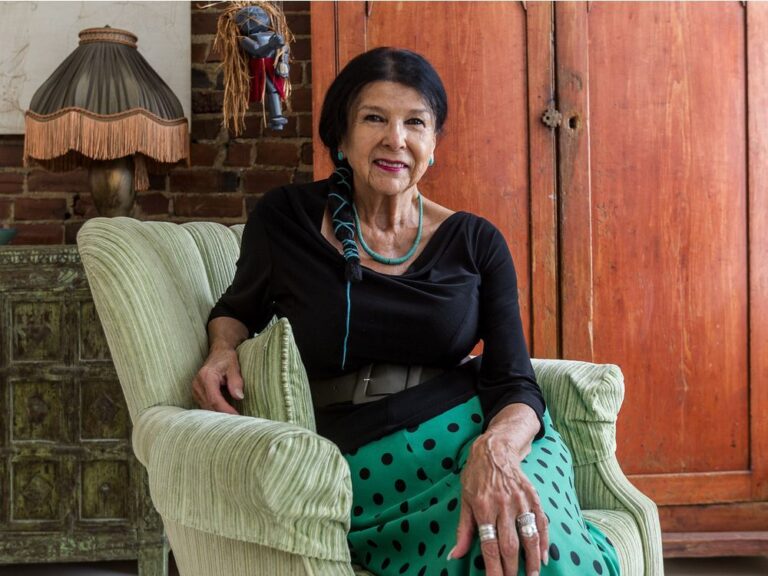 On National Indigenous Peoples Day, we recognize and celebrate the unique heritage, diverse cultures, and outstanding contributions of First Nations, Inuit, and Métis peoples throughout Canada. And there is no better way to celebrate such a profound and rich culture than through film. We yearned to highlight Alanis Obomsawin, an Abenaki activist, educator, and artist who has a reputation for standing out, especially when everyone around her strives to fit in. She became a part of the NFB to ensure that Indigenous individuals had a solid and authentic voice to represent them in the arts, after they have been silenced in all other aspects of life in Canada. Despite the backlash she received for her “otherness,” at the NFB, Alanis refused to become anything less than who she was. She succeeded in inspiring millions of people of all backgrounds simply because she remained true to her identity.

Two of her most popular documentaries, Trick or Treaty? and Kanehsatake: 270 Years of Resistance, explore the essence of cultural identity by unpacking ideas of otherness, belonging, the home, ethnicity, bigotry, and stereotyping. Such films are compelling because they are unique to the Indigenous experience of living in Canada. As an audience, we are third-party spectators invading their heartfelt thoughts, a privilege that allows us to gain a deeper, more raw understanding of what it truly means to be equivocated, demeaned, ignored, and abused. Such stories would never translate as powerfully as they do in films like this, unless Indigenous individuals recount their own tales. The result is a factually accurate representation of the culture and people, opposite to a colonizing product produced through a discriminatory lens. Alanis’ films offer the audience a distinct perspective by challenging their opinions and interpretations while steering them outside of their comfort zones, encouraging both critical and reflective thinking.

In Kanehsatake: 270 Years of Resistance, Obomsawin attempted to decolonize the white screen by abolishing what Churchill called “fantasies of the master race,” seen in many films where Indigenous people are presented on-screen with white voices overshadowing them. Obomsawin explained that Indigenous people are only invisible because they are not conforming to the white imagination of “Indian.” Obomsawin gave Indigenous people a voice, allowed them to speak for themselves, and taught people about their true beliefs, culture, and experiences.

Trick or Treaty? focused on the themes of togetherness and the essence and importance of community. In almost every sequence, we see groups of Indigenous individuals working together to solve all problems, whether marching through the streets in Ottawa, consulting with a Nipissing university professor, or while on a snowshoe journey across Canada. Alanis yearned to highlight the selflessness of the Indigenous culture, and how the pedestal on which they place togetherness reflects their qualities and characteristics as human beings. This positive outlook allowed Alanis to correct false stereotypes by exhibiting actions instead of words. The people speak for themselves through their character and the aura they project daily. This not only proves that Indigenous individuals embrace unity but that they are resilient as well. One thing that specifically stood out was the fact that Indigenous individuals were never solely motivated by revenge or hatred despite the oppression they have gone through. Instead, they hold a more profound and mature vision which prompts their actions: fairness, acknowledgment, change, and respect.

It is crucial to note that in one way or another, through a highly general perspective, pride has taken over every culture. To a certain degree, every culture carries a certain level of prejudice stemming from toxic societal conformism. Although nobody likes to admit it, most people see their traditions as better than those around them. Sadly, Indigenous individuals have become victims of this bigotry and selfishness in Canada. Therefore, judging people based solely on a stereotypical account of their culture that is misunderstood is exceptionally unfair and immature. Learning to live with difference and change, leaping out of one’s comfort zone, and distancing oneself from familiarity is what help one grow. It broadens one’s perspective and allows people to realize that although we may physically look different on the outside, all humans share common goals and strive for similar purposes.

“Documentary film is the one place our people can speak for themselves. I feel that the documentaries I’ve been working on have been very valuable for the people, for our people to look at ourselves.” Alanis Obomsawin in Sandy Greer, “Alanis Obomsawin” Turtle Quarterly, Spring/Summer 1991:22-27

You might also like
One of the following
Join us tonight to watch Scarborough!
Supporter Spotlight: Old Oak Properties
Submissions are open for FCFF 2022!
Search
Categories
Recent Posts

Join us tonight to watch Scarborough!