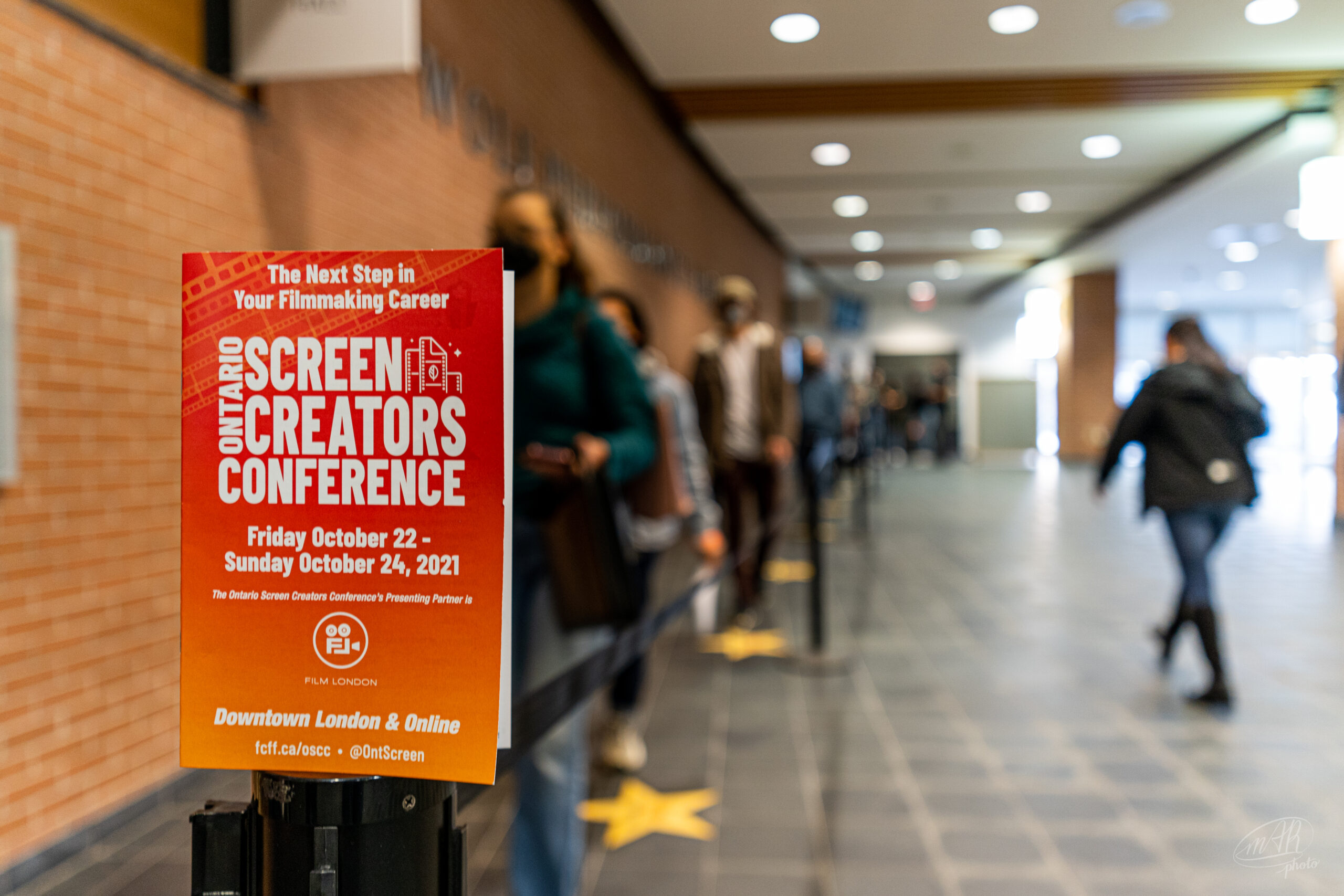 The first ever Ontario Screen Creators Conference happened in the heart of London last year during the annual Forest City Film Festival; this 2021 OSCC brought seasoned and amateur filmmakers together in London, ON like never before. As we prepare to bring the OSCC back for a second year, let’s rewind and reflect on last year’s highlights.

The main mission of the OSCC is to foster connections and new modes of learning for everyone within the film industry, no matter their role or how long they have been in the vast world of filmmaking. OSCC offered unique industry sessions from Diverse Voices and Find Your Funding to the Mix & Mingle event. They each ranged in their depth within the level of teachings to casual networking opportunities. Find Your Funding offered a chance for aspiring filmmakers to sit down with representatives from Bell to CBC to have group discussions and allowed audience members to ask direct questions of the panelists; both broad or relative to their specific film.

Diverse Voices provided discussion into the rise of authentically diverse voices within the film industry alongside rich discussion on how to provide a platform and champion these perspectives. These in depth discussions always provided opportunities for direct questions, but the OSCC mix and mingle event allowed for deeper connections to be formed between both OSCC attendees and panelists alike. Mix and Mingle provided a laid back setting to engage in easy conversations to create connections between both amateur and seasoned filmmakers. As the OSCC conference moves to a fully in person event in 2022, you can expect all this and more with more opportunities for mentorship and conversations.

The OSCC workshops moved to highlight the back bone of filmmaking through the lens of technology by covering both Volumetric Video alongside a Masterclass in Sound. The volumetric video capture workshop covered the popular cutting edge technology known as volumetric video, outlining the technologies rising achievements generating life-like 3D avatars of actors and performers.  OSCC held the Schitt’s Sound Masterclass featuring Mark Vogelsang who led the conversation with panelists from both sound crews of Schitt’s Creek and The Handmaid’s Tale as they engaged in immersive discussions about the power of sound in film.

OSCC workshops pushed through barriers of these physical formats of filmmaking with trend and content analysis of different genres and popular films. Documentary Design featured some of the best documentarians in Ontario, the panelist touched upon what it takes to make a groundbreaking documentary for maximum entertainment; from archives, graphics, and shooting styles in production design. FCFF and OCSS collaborated for the Case Study of Beans (2020), the award winning film directed by Tracy Deer. After the screening at FCFF, OSCC attendees were invited to attend a panel including the producer and Co-Writer of Beans, who worked through the technicalities and the heart that went into making such a successful and immersive story. The event also included a message from Deer as a surprise behind the scenes perspective on the feature film. You can look forward to more Behind the Scenes panels in this upcoming OSCC as the conference works alongside FCFF to provide an inside look into the makings of feature films and the minds of the filmmakers creating them.

The four day extravaganza that is the OSCC ended with Canada’s Largest pitch prize of 60k in cash and prizes. Keeping true to OSCC’s mission to nurture Canadian filmmakers and London’s growing film industry the prize was awarded to Too Many Words media’s directors Olga and Geordie Sabbagh; who are now in the midst of creating a 70’s crime thriller in the heart of London, ON. Stay tuned to see what we have in store for this year’s Project Pitch! OSCC 2022 is still accepting applications to this year’s Project Pitch till September 10th 2022. Take this opportunity to show what you’ve got to the event’s esteemed judges and attendees!

The OSCC had an amazing first year thanks to all of the attendees, panelists, judges and moderators! As we move into our second year with less restrictions we are making the event more hands-on with more opportunity for one on one networking between our attendees and experts. Keep your camera rolling because you don’t want to miss OSCC 2022!

Tickets for this upcoming OSCC go on sale this August starting Monday, 15th, 2022!!

Connect with us through our socials below to keep up with the action and look out for info regarding our new opportunities coming at OSCC 2022..

You might also like
One of the following
Micro Meetings: Three in One
Perfecting Your Pitch
The OSCC Survival Guide For Filmmakers
Search
Film Categories
Plan Your Day

Coming Soon to the OSCC..