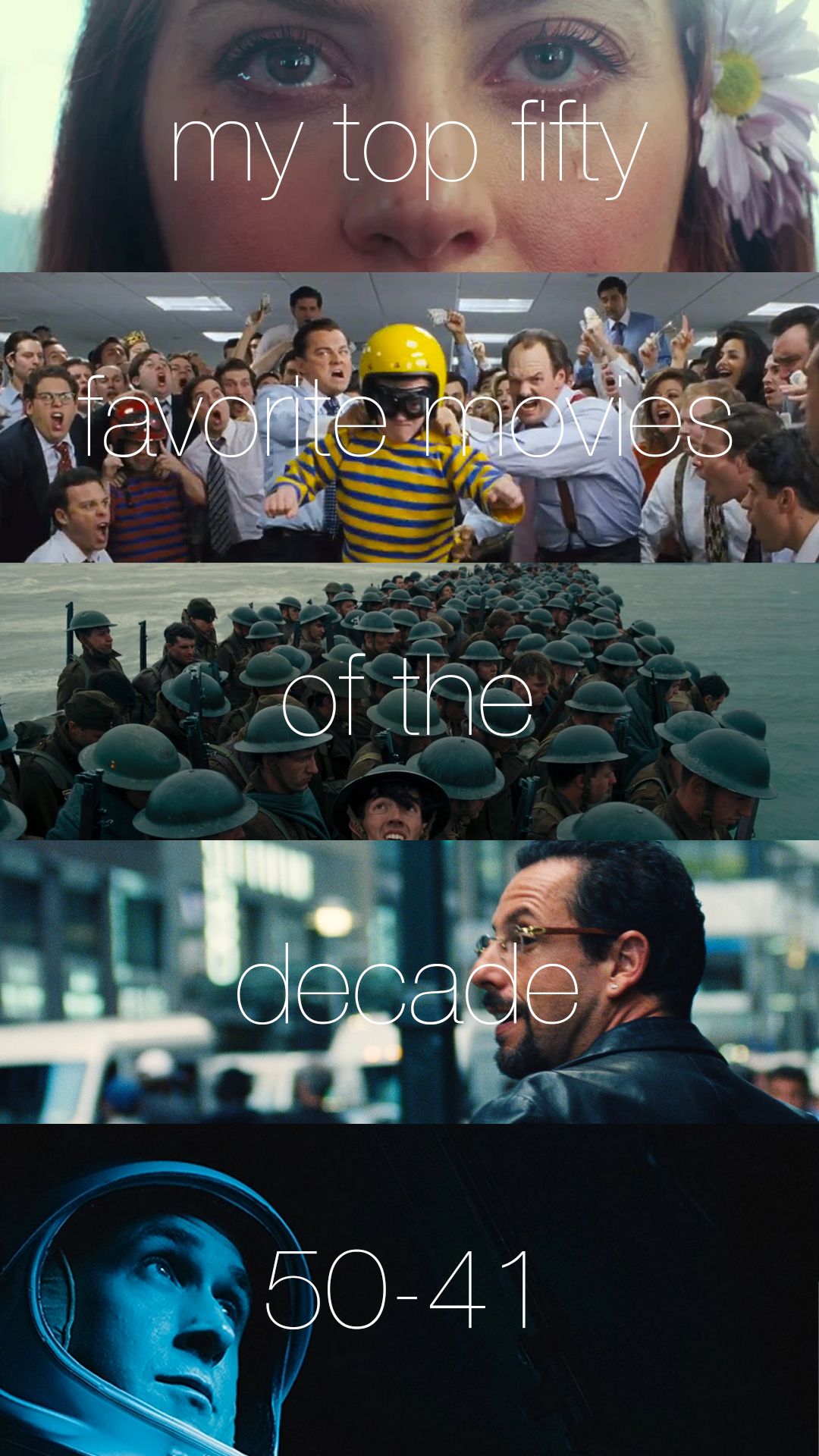 Here we are, a lot of lists and we’re getting close to the end. Just as a note here, when making these lists, we made a rule in order to make sure we could give as many recommendations as possible. All of the films can only show up on one list, which means that from 50-1, these are all films that we have not yet talked about. Today is the first day of our top 50 countdown, so without further ado, here are our favorite films of the decade, from 50-41.

The first superhero movie to score an Oscar nomination for Best Picture. BLACK PANTHER plays less like a typical superhero movie, and more like a James Bond movie set in an Afro-Futuristic fantasy world. Using some really smart and biting social commentary, the action hits way harder than Iron Man saving the world for the umpteenth time (although we enjoy that too). And the design elements of this movie push it over the edge as an incredible achievement in the superhero genre that we are excited to see Marvel attempt to top.

A SEPARATION is an incredibly layered drama, both about something as simple as the separation of a couple, and something as large as the corruption of the political and judicial system in the country of Iran. This movie will stick with you as a poignant political commentary, and an extremely sad portrait of a relationship falling apart.

Starring Londoner Ryan Gosling in the near-silent lead role, DRIVE plays like an artsy version of the FAST & FURIOUS movies, where bursts of action play under heavenly synths, and everything is lit with neon. The violence comes fast and hard, and the silences come slow and pondering. The film is an incredible artistic achievement as well as being incredibly entertaining.

FOR SAMA might just be one of the greatest documentaries ever made. Currently nominated for the Oscar for Best Documentary, this film takes a look at the Syrian War from a different perspective. This isn’t from the perspective of outsiders, but instead from someone living in Aleppo, who chose to stay and run a hospital instead of leaving, and when she had a child in the middle of the constant bombing, she decided to stay even then instead of fleeing to protect her child. The movie ceases to be a film about the conflict and becomes more of a letter to the filmmaker’s daughter about the choices that her parents made. WARNING: There are a lot of dead people in this movie, and if you are squeamish, stay away.

And now for something completely different! POPSTAR: NEVER STOP NEVER STOPPING flopped when it hit theatres because no one knew exactly how to market a fake documentary about a fake musician who is really just a riff on arrogant teen megastars like Justin Bieber. If you enjoy the humor of BROOKLYN 99 or any of The Lonely Island’s music, or have followed any pop culture in the 2010s, this movie will be a joy from start to finish.

Everyone was affected by the 2008 Financial crisis in some way, and very few were affected positively. THE BIG SHORT follows the story of 3 groups who bet against the big banks and won big because of their failure. THE BIG SHORT wasn’t just great because of its subject matter though, but because of its creativity in how it was all handled. It very sarcastically explains complex concepts through fourth wall breaking, celebrity guests, and constant meta references to the fact that this is just a dramatization.

Yes, BOYHOOD did take 12 years to make, but it’s not because it took 12 years that this film is great. It’s because of what happened in those 12 years. There’s a beautiful growth and development that we get to see take place in front of our eyes, and we get to watch all of the 2000s pass by our eyes as they happen for the characters. The film offers something to relate to in the experiences it presents, and the gimmick central to the film is rarely drawn attention to, but instead just something that happens as it would in real life.

Who woulda thought that a 2 hour movie about a guy trapped alone in a canyon with his arm under a boulder would be good cinema? Well it is, mostly because of the creative writing and editing of a masterful filmmaker, and an energetic lead performance by James Franco. As Franco struggles towards a gruesome and inevitable end, we’re taken on an incredible adventure of survival and internal struggle.

IF BEALE STREET COULD TALK is cinema at its full potential for greatness. It’s not exciting, it’s not action packed, it’s not a sweeping romance. Instead it demonstrates that the power of movies lies not in the story, but in the beauty of the image. Plus, it boasts one of our favorite soundtracks of all time.

The Coen Brothers have become masters of the Western genre, and TRUE GRIT is possibly their best one. This film features a 13 year old Hailee Steinfeld (who has since become a pop superstar) chasing down the outlaw that killed her father. It’s a beautiful looking, thrilling movie set in the old west, which will surely satisfy your craving for a good cowboy movie.