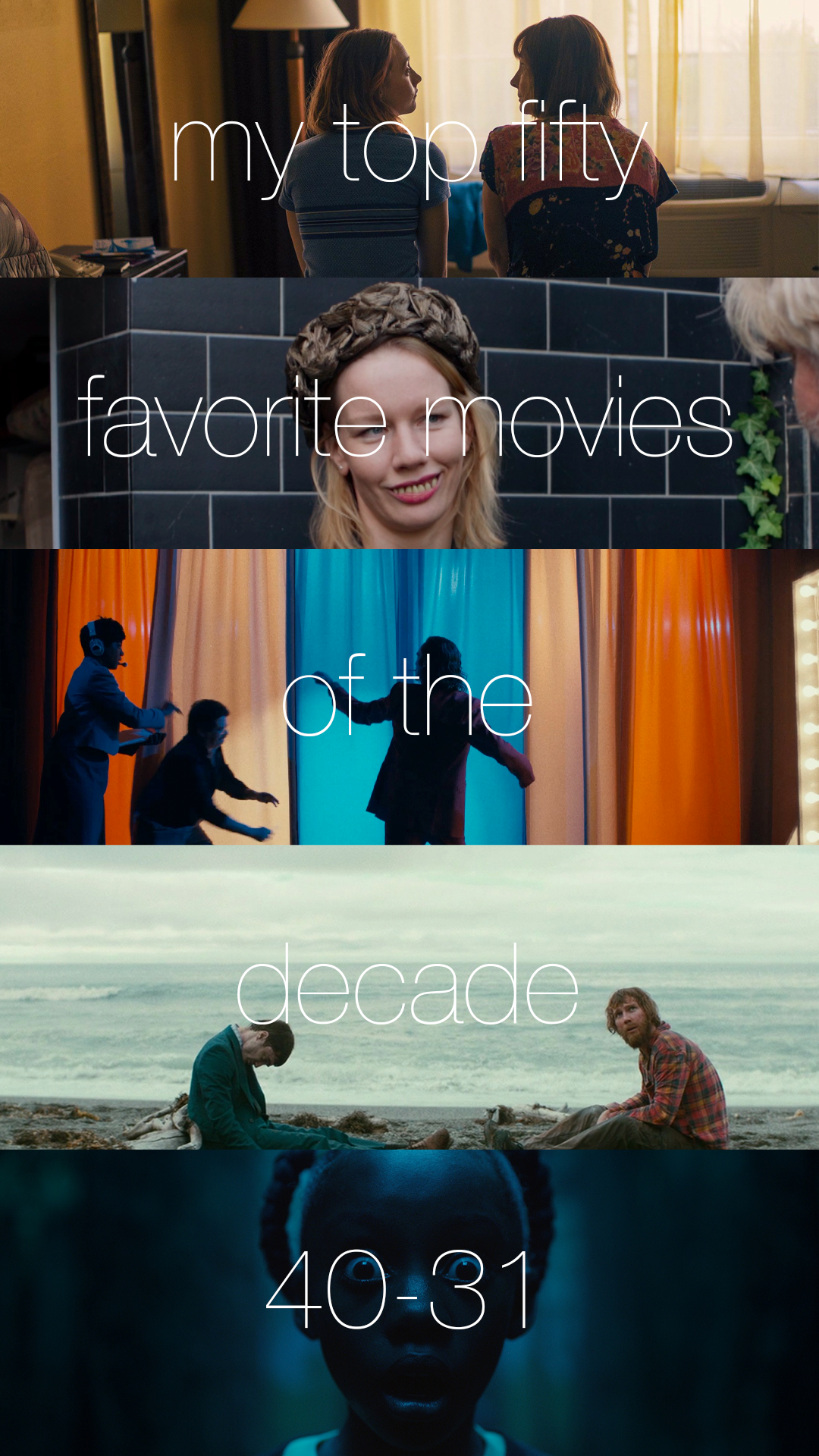 Welcome to the second day of our countdown of the 50 best films of the past decade. As a reminder, none of the films named here will have been on any of our previous lists. We’re saving our favorites for last! Without further ado, here are 10 more of our favorites, counting down from 40-31.

HARRY POTTER is certainly more of a phenomenon of the 2000s, however, the conclusion to the saga came out in 2011, and it would be a major disservice to the best film of that series to not include it on this list. HARRY POTTER AND THE DEATHLY HALLOWS PART 2, like BOYHOOD has seen its main character grow up in real-time, but unlike BOYHOOD, this movie has crazy magical action scenes. It’s an exciting and satisfying ending to the series, and delivers everything that made me fall in love with the series in the first place.

THE REVENANT finally won Leonardo DiCaprio the Oscar that had been Meme’d about for many years. But the movie is much more than a stunning performance, it’s a tense and brutal adventure in the Canadian frontier, with amazing nature photography, shot only using natural light. Leo is in fact incredible in this movie, but the real star of the show is the technical achievement of making something so beautiful out in nature.

The year before THE REVENANT, the same director made another movie, this one winning the Oscar for Best Picture. BIRDMAN (or the Unexpected Virtue of Ignorance) is a film made to look like it is shot in one take, all set inside a Broadway theatre, as a failing actor plans to mount a play so that people will take him seriously again. BIRDMAN is a hilarious and crazy technical achievement, featuring one of the sharpest screenplays ever written.

Don’t let the period costumes and setting fool you into thinking this is anything like DOWNTON ABBEY (not that there’s anything wrong with Downton Abbey), THE FAVOURITE is a raunchy and downright weird comedy about childish royalty and the women who fight to win favor of the queen. Anchored by three incredible lead performances, and beautifully designed costumes and sets, this movie does a great job at convincing you that it isn’t one of the strangest things ever produced. If you’re down to get weird, THE FAVOURITE is for you.

THE ARTIST came out of nowhere to win Best Picture in 2011, and was promptly forgotten all about. However it really deserves to be remembered, not only because it’s a great tribute to silent Hollywood movies, but because it has a huge heart and a great sense of humor.

INTERSTELLAR is a fantastic science fiction movie, taking the big questions of 2001: A SPACE ODYSSEY, and mixing in the big action of STAR TREK. Deep space exploration has never looked so good, nor been so emotionally devastating.

Animated in watercolours like an old-fashioned story book, THE TALE OF PRINCESS KAGUYA tells the fantastical story of a little girl found in the forest, who is destined to become the princess. It’s artfully crafted and designed to tear your heart out.

The teenage romantic comedy for people who listen to vinyl records and watch Wes Anderson movies. ME AND EARL AND THE DYING GIRL takes cues from about 70 different classic movies, which it references, steals from, and artfully incorporates into a plot about a self-hating introvert who is forced to become friends with a terminally ill girl. With a Brian Eno soundtrack and a killer sense of humor, ME AND EARL AND THE DYING GIRL is the alternative solution for mainstream teen movies like THE FAULT IN OUR STARS.

In GRAVITY, Sandra Bullock is trapped floating endlessly in space for 90 minutes, which becomes a heart-pounding, intensely spiritual action movie about the will to survive. Not only is it beautiful to look at (you would think they actually filmed it in space! but obviously not), but it’s also a smart science fiction movie that thinks differently about storytelling.

If you aren’t already convinced that Oscar Isaac is one of the greatest actors of this generation, watch the first five minutes of INSIDE LLEWYN DAVIS and you will be converted. This movie follows a folk singer as he burns bridge after bridge in 1960s New York City, all the while singing some of the most haunting songs you will ever hear. Loosely inspired by James Joyce’s ULYSSES, this movie is a journey ultimately ending in nothing, but the journey is worth taking all the same.