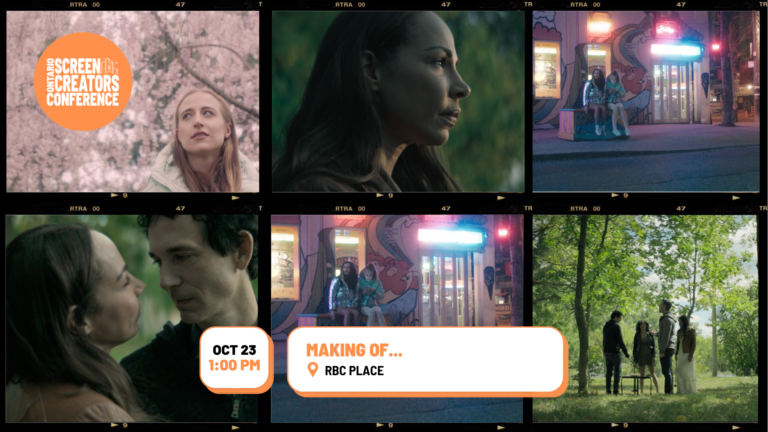 Behind the Lens: The Making of Ashgrove and Adult Adoption

This year’s Making Of… panel is back and better than ever featuring filmmakers from TWO unique films. Join us as the key creative teams from feature films Ashgrove and Adult Adoption tell us about the trials and tribulations on their paths from idea to audience.

Both films are in competition at the 2022 Forest City Film Festival in the Narrative Feature category, so make sure to stop by and check the panelist out in action!

Ashgrove had its world premiere at the 2022 Glasgow Film Festival, this feature won Best Ensemble Cast and the William F White Reel Indie Awards at the Canadian Film Festival.

When a troubled couple escape to their rural farmhouse for a weekend of reconnection, they realize that their ability to save their marriage will literally determine the fate of humankind itself.

Joining us from behind the lens of Ashgrove are the versatile industry experts Jeremy LaLonde and Jonas Chernick.

Director and Producer LaLonde is a four-time Canadian Screen Award Winner, three-time Canadian Comedy Award Winner, and a winner of the Director’s Guild of Canada’s Best Direction in a Comedy Series. Each of his previous films have garnered Best Feature Film awards at various festivals and have gone on to be released internationally.

Actor, Writer and Producer Chernick also boasts four awards for his previous feature film at Toronto After Dark Film Festival on top of various nominations for the Canadian Screen awards. He will next be seen co-starring opposite Kiefer Sutherland in the upcoming Paramount Plus series RABBIT HOLE.

If you are interested in checking out Ashgrove prior to the panel CLICK HERE for your tickets to join us at the FCFF screening of the award winning feature. This film will be screening at Wolf Performance Hall on Friday, October, 21 at  9:00 pm. Check out the TRAILER!

After being aged out of the foster care system, Rosy turns to the internet to find a family and escape from the loneliness of life.

Stepping out from Behind the Lens of Adult Adoption are triple threats Karen Knox and Kristina Esposito.

Adult Adoption Director Knox is based in Toronto where she is also using her skills as an actor and writer. Knox has won various awards from several shorts made with her company Boss & Co including both best short film at Venice Short Film Festival and Budapest Independent Film Festival. She is currently the creator/director/writer of the CBC series HOMESCHOOLED.

Esposito is a producer with her company KEME Productions. Esposito was one of Reel World Film Festival’s Emerging 20 with her short CAPTIVE LOVE which later premiered at the TIFF Bell Lightbox. COVER SONG, a musical she conceptualized and produced, won the Patron’s Choice Award for the London Fringe Festival.

If you are interested in checking out Adult Adoption right after the panel CLICK HERE for your tickets to join us at the FCFF screening of the award winning feature. This film will be screening at Wolf Performance Hall on Sunday, October 23rd at 3:15 pm. Check out the TRAILER!

CLICK HERE to purchase your tickets for the OSSC Making Of… panel, taking place at RBC Place at 1:00pm, Sunday, October 23rd.

Connect with us through our socials below to keep up with the action and look out for info regarding our new opportunities coming at OSCC 2022!

You might also like
One of the following
Letter from Dorothy
REBEL ANGEL: A Labour of Love
The Official OSCC Call List
Search
Film Categories
Plan Your Day

Micro Meetings: Three in One

Figuring Out Film Unions: Who Are They?