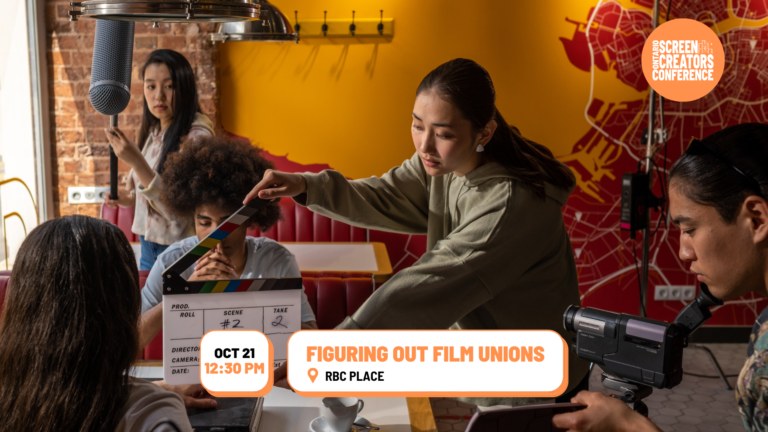 Figuring Out Film Unions: Who Are They?

Join us to learn about the top unions in the industry and how you can start working professionally on the next blockbuster movie. Ontario is home to many unique unions created to assist budding industry stars in all facets of filmmaking. As our local and provincial film industry continues to grow, we aim to arm you with the tools to bring your career to the next level. Unions not only offer support but can act as a connection into your next award winning picture! The OSCC has gathered four distinctive unions into one seminar for your convenience to talk about what they’re all about – here’s a sneak peek into who they are and what they do..

ACTRA is a national union of over 28,000 professional performers working in English-language recorded media in Canada, including TV, film, radio and digital media. While it is a national union ACTRA features branches throughout the entirety of Canada to directly reach performers within the entire country. ACTRA acts as a negotiator, administrator and works to enforce collective agreements which are put in place to guarantee equitable compensation and safe working conditions. ACTRA works closely with all performers from stunt performers to comedians to choreographers and many more.

The Directors Guild of Canada (DGC) is a national labour organization that represents over 5,500 key creative and logistical personnel in the screen-based industry covering all areas of direction, design, production and editing. The DGC negotiates and administers collective agreements and lobbies extensively on issues of concern for members, such as Canadian content conditions, CRTC regulations and funding for Canadian film & television programming. This union also provides learning and working experiences for their members, including but not limited to training/ development mechanisms within the context of emerging technologies and support regarding member employment opportunities while guarding members interests.

NABET 700-M UNIFOR is a union of film, television and new media technicians that has serviced the greater Toronto area for over 45 years.  NABET 700-M is founded by UNIFOR, Canada’s largest private sector union with more than 300,000 members in all sectors across the country.  NABET 700-M UNIFOR currently has over 3,000 qualified technicians in fifteen departments of the film and television industry. This union is focused on those in the Continuity (ScriptSupervisor), Construction, Costume, Grip, Hair, Labour, Lighting, Make-up, Paint, Props, Set Decoration, Sound, Special Effects, Videotape Transportation sectors. NABET 700-M UNIFOR offers opportunities for training and assists in strengthening job opportunities.

IATSE stands for The International Alliance of Theatrical Stage Employees, Moving Picture Technicians, Artists and Allied Crafts of the United States and Canada. They are more than 150,000 workers strong in virtually all arts, media, and entertainment crafts. IATSE features 16 local unions within Ontario itself, when looking specifically to London they host a LOCAL 105 mixed union which is open to professionals across the industry. IATSE International supports the local unions and members through coordinating negotiation of nationwide agreements within the U.S. and Canada, while simultaneously lobbying for pro-worker policies. IATSE engages directly in collective bargaining campaigns to provide support to their members in addition to further this member engagement IATSE works to arm their local unions with education relative to industry positions of their members.

Ontario itself is a hub for the Canadian film industry. While there are nationwide unions, if you are just entering the industry, finding a place within your local union can make all the difference with the right support behind you as you further your career. Ontario specifically is home to all four unions which cover unique areas of film so you will always find a place for yourself and your skills.

CLICK HERE to purchase tickets to the film unions panel to interact directly with leads of the nationwide unions.

Connect with us through our socials below to keep up with the action and look out for info regarding our new opportunities coming at OSCC 2022!

You might also like
One of the following
Letter from Dorothy
REBEL ANGEL: A Labour of Love
The Official OSCC Call List
Search
Film Categories
Plan Your Day

Behind the Lens: The Making of Ashgrove and Adult Adoption